That computer can browse the web, but "the web" (or, web users around the globe) typically can't browse files or web applications running on that computer. Publishing a server on the internet takes work, costs money, and requires maintenance and upkeep. It can be especially difficult if you want to use your computer, not rent someone else's. If you live in a dormitory or if you get internet access via wifi from your neighbor or via tethering to your phone, you may not be able to perform the necessary modifications to your router's configuration even if you knew how.

Greenhouse provides an easy way to make one or more computers into servers that anyone in the world can connect to securely & reliably, regardless of where or how the servers are connected to the internet.

Greenhouse is being designed from the ground up as a trustless service, that is, you don't have to trust me or whoever's running the service to keep your data secure — it's designed so it can't access your data in the first place.

For more information about why I am building this, see greenhouse.server.garden and The "Pragmatic Path" 4-Year Update: Introducing Greenhouse!

You may also check out the source code at git.sequentialread.com/forest/greenhouse

Next post in this series: 🥳 Greenhouse Enters Alpha Test Phase!! 🎉

No, seriously, as I write this, it's about 22 minutes until midnight, that time when the calendar rolls over to October 1st.

I spose I've delayed writing a Greenhouse update post for September until now because I was secretly hoping I could get the alpha version released this month. Well, it's definitely not happening at this point. However, at least I can say it's not for a lack of trying.

This month I tried to make a short list of tasks that I'd have to complete before releasing an alpha version of greenhouse. To me, alpha means that it's relatively unstable, it probably doesn't have very many users, and it's free; payments have not been implemented yet.

I believe I started out with a list of about 8 items. By the time I had completed half of them, the list had grown to 17 items 😛

By now it looks like it's grown to 24 items, but on the bright side, only 8 of them aren't started yet.

I wasn't sure just how quick-and-dirty I wanted the alpha version to be. For example, does "alpha test version" mean it only works on Linux? Does it mean the Windows and Mac implementations are there, but super hacky?

I spent a lot of my time this month grappling with these decisions. Often times I would investigate what work would actually be required & attempt to decide based on the technical reality I was facing, rather than a theoretical estimate.

I think I've been erring on the side of "do it right to begin with" to some extent, at least where the amount of work associated with that decision is minimal.

Here's a brief list of decisions I've made so far:

Here is a screenshot of the work-in-progress alpha version of the web application: I think I got a lot done this month, for one thing, I finished the CLI (command line interface). Here's a breif overview of what it looks like:

I also made serious headway on getting the software built and deployed for all platforms. At this point, windows is most of the way there. ¡Bienvenido a IIS! 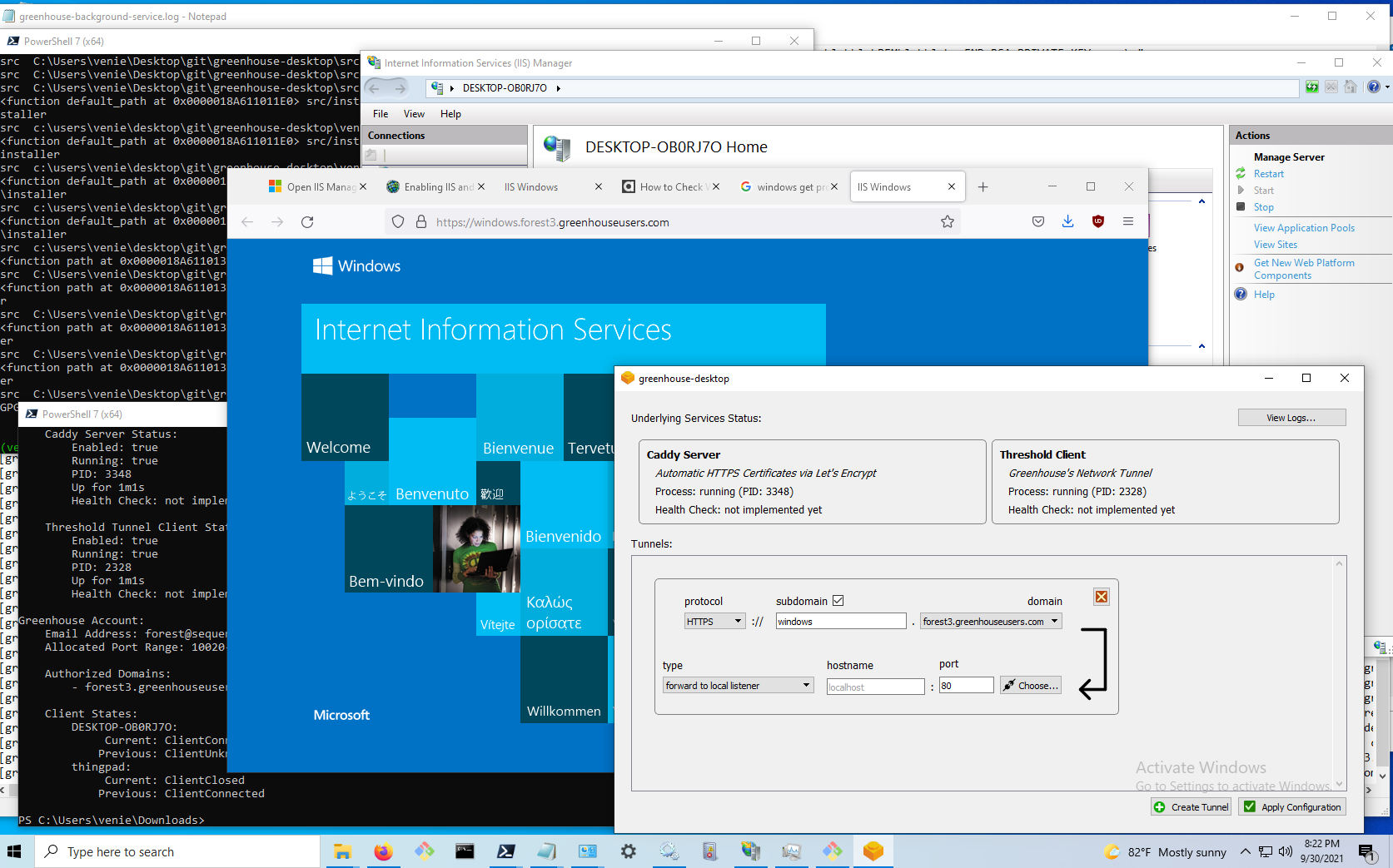 I managed to get the greenhouse-daemon (called greenhouse-background-service on windows 😇) installing as a windows service via the NSIS installer, and it even creates a special service user for that as well. I mainly wanted to do that to isolate greenhouse for its own protection; make it a bit harder for malware running on the windows machine to swipe the encryption keys that are used for TLS, for example. I'm still fairly green on file permissions / security on Windows, so if any of yall are Windows experts, I'd love to hear your thoughts in the comments!

There are still quite a few bugs and issues on Windows, but just the fact that I was able to get everything going via a single .exe installer is exciting!

I also got the desktop application running on MacOS, in the picture below I am using the Sosumi snap to virtualize MacOS on my linux workstation.

Here's the roadmap as it stands today. The main changes since last time; the cross platform installer feature was moved from the beta phase to the alpha phase, the CLI was finished, and a lot of other features went from "MVP implemented" to "ship it". Next post in this series: 🥳 Greenhouse Enters Alpha Test Phase!! 🎉

For more information about why I am building this, see greenhouse.server.garden and The "Pragmatic Path" 4-Year Update: Introducing Greenhouse!

You may also check out the source code at git.sequentialread.com/forest/greenhouse

Using Jitsi Meet with OBS to bring guests on your stream