I just finished migrating sequentialread.com to an ODROID HC1, plus tons of updates to my infrastructure & apps!

Long ago, I set up this website on an old (and now, ancient) discarded HP desktop dubbed the recycle computer ♻️.

I hadn't updated it in many years, as I was busy being a career man, so I did the typical thing and just kept using the old system... For many years. For about four and a half years, I think. It served me well, but was time to put it out to pasture. I'm pretty sure I paid more for electricity to run that thing than I saved by getting a hand-me-down computer for free. I never planned to keep it around that long, it just sort of.. happened.

But now that I have more time on my hands, I decided it's time to update, and I chose my ODROID HC1 as a target platform for my new server, simply because I was given one as a gift, so I had an extra, and I liked the stonk since a long time ago. 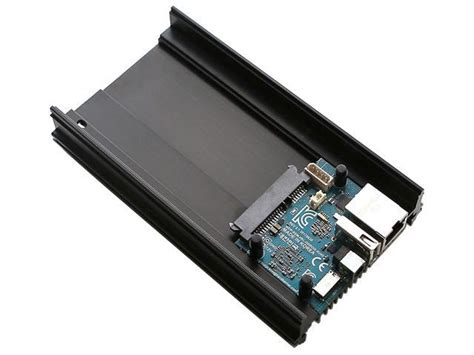 The HC1 is essentially the same board as the ODROID XU4, however instead of a USB 3.0 port, it has a powered SATA III port for a hard drive and a fatass heatsink built in, functioning as the frame/enclosure. It's perfect for self-hosting, its cheap and the SATA port being built in, having a reliable power supply for both the disk and the CPU eliminates a lot of potential worries that might otherwise plague SBC (single board computer) servers.

The CPU is decently fast (8 cores!), the USB 3.0-based SATA III storage works great, the only downside I can see for this machine has to be the RAM; it only comes with 2GB, compared to the 4GB or 8GB on the Raspberry Pi 4.

But for my use case it seems to work fine, I am currently running a whole slew of apps on there via docker-compose, including the page you are reading right now, and it's using less than half of the avaliable memory. Horray for golang-based web services!

I'm using Armbian for the host operating system, and I have to say, I've rapidly become a fan of the Armbian project and community. They are very approachable online, and get this, the build script for the operating system worked on the first try when I tried to make a custom image on my amd64 workstation! I was able to easily produce an installable image file with my custom packages and software pre-installed / pre-compiled.

During the process of migrating / updating all my apps, I touched just about everything I host and even completely re-wrote some things.

phew!🥵 this was hard work. I spent at least a month doing all of this stuff, but I'm proud of where I ended up. I'm glad to have up-to-date & secure tools to continue publishing and working. Plus I, have better visibility into my site & the web traffic, for what it's worth.

I wanted to have a more sturdy foundation as I continue to build greenhouse, and I think this is a great start.

I'll leave it at that for now, but I'm excited to write in depth about some of these updates in the future.