No, I'm not changing this into a food blog, but I have been taking a break from working on my software projects for a couple months now while I'm trying to take care of my health.

I had fun with this little side project and it's easy for me to use this blog as a format for sharing it.

When I first tried coffee and started drinking it regularly in my early 20s, I loved the drug but hated the taste. Back then I bought a bottle of caffeine powder online and started simply eating the powder instead of making coffee. It still tasted bad, but "in a pinch" (quite literally) it'd get the job done. If you've never tasted pure caffeine, its very bitter, kind of similar to the taste of the white part on the inside of a grapefruit rind.

While I was in the dormitory crudely shoveling white powder into my mouth, I was thinking about how I could make a better energy drink. Back then I couldn't afford energy drinks, but even if I could, I wouldn't have wanted to drink em all the time, they're usually syrupy sweet, even worse than a typical soda. I was never liked artificial sweeteners either. I wanted something other than a 40 gram mound of sugar to mask the bitterness.

I know that salt can help cut down bitter flavors in food, and I also figured that if I went for a flavor that's "supposed" to be bitter, it would jive better with the caffeine. Back then I guess all of this was firmly in daydream territory, I had other stuff going on and no time for caffeine adventures in the kitchen.

Fast forward 8 years: Since then, a lot has changed: 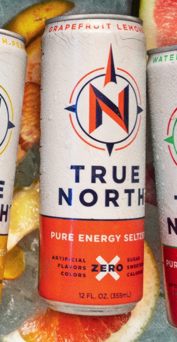 So what was I to do?

I never forgot about my dream of a tasty but unsweetened or semi-sweet energy drink. Like most of my daydreamed creations, someone else beat me to it. This little number on the right is produced by everyone's favorite energy drink monopolist Monster Beverage. I drank a couple of these recently and I can say I think my theory about the bitter flavor is correct. I tried thier cucumber lime flavor as well as the grapefruit, and you can definitely taste the caffeine in the cucumber one while its almost unnoticeable in the grapefruit.

That said, energy drinks are ridiculously expensive for seemingly no reason ( I mentioned they're ruled by a monopolist, right? ) and this one's no exception. Oh, and it's a bit weak for my taste at 160mg. Over the course of a day, I want the full caffeine experience, and for me that weighs in at 300mg or more. (About 16oz of coffee)

This was the straw that broke the camel's back; I had to finally try to concoct my own, and fate had granted me the tools to do so:

When I was discussing this at first, the question came up,

will caffeine kill or inhibit the yeast?

I did some research on this, and came across a paper on this exact subject:

Investigating the caffeine effects in the yeast Saccharomyces cerevisiae...

Deciding on a Process

At first, I set out to learn a little bit about homebrewing. I knew that it's possible to brew a beer with a negligible alcohol content, and I knew that one can brew low-alchohol sweet and fizzy ginger beer at home without any fancy equipment, but I didn't know how to approach the project.

I wanted to come up with a process which would yield a relatively shelf-stable product that's carbonated and ready to drink without having to be stored in the fridge.

The wild yeast "probiotic active cultures" ginger-beer-type process seemed like a non-starter, because it requires regular care and feeding and has to stay in the fridge.

I also knew that if you bottle an actively fermenting liquid like beer, and it has a lot of sugar in it, the yeast will create so much pressure inside the bottle that it'll explode on the shelf. Or even worse, as soon as you try to pick it up and open it!

At first, I thought my goal would be to figure out how to calibrate my mixture somehow so that the yeast would stop growing at the right time in order to prevent the bottle from exploding. But it turns out that's simply not a thing; it can't be done. Yeast love to eat, and there's no trivial way to stop them as long as more sugar is available in the bottle:

In the end, I decided to eschew both of these options and choose simplicity: I would only include enough sugar to carbonate the drink, no more, no less. The yeast should eat all the sugar, and in the end, the drink should be essentially zero-sugar. From various eyewitness accounts and "priming sugar" calculators online, I estimated this amount of sugar at approximately 160 grams for a 5 gallon batch.

Essentially the process would be exactly the same as the process for making beer, except my "wort" (fermentable liquid) has much less sugar in it, with caffeine taking its place, and I'm skipping the bulk fermentation process and going directly to bottling shortly after "pitching" the yeast (adding the yeast to the mixture after it cools down).

Coming up with a Recipe

aka "The Full Grapefruit Experience"

I created the following diagram to explain my overall thesis here. Each ingredient is located around the area of the grapefruit that it's supposed to "taste like" or "represent" when it's in the finished drink.

I'm no food scientist or chemist, and to be honest I didn't try very hard in this part. The core idea was to take a grapefruit apart, swap the pith (white part of the rind) out for caffeine, and put it back together as a drink.

At the same time, I tried to include ingredients that have health benefits while also complimenting what I'm trying to do with the flavor.

In the end, my recipe for twelve 750ml bottles looked like this:


Like I mentioned before, retail sales of caffeine powder have been banned, so I had to use the next best thing: Caffeine gel cap pills.

These pills are cut with rice flour, so to separate the caffeine from the rice flour, I emptied them into a bowl and then poured hot water over it. The caffeine will dissolve and the rice flour will sink to the bottom. Most of the liquid can be decanted off the top, and the rest can be grabbed by pouring the slurry thru a coffee filter.

In order to try to extract the most out of the grapefruit peel, I threw the left over syrupy peel into a blender with some hot/warm water, then poured the results through a coffee filter. (Plastic blender users: Be careful! Too hot of water can crack your blender carafe!)

The following video shows my brew after adding all the dry ingredients and pouring in the blended-grapefruit-peel-water. Some solids had formed overnight in the water based peel extract, but they dissolved later.


For the grapefruit juice, I simply took the red grapefruit flesh out and chucked it in the blender:

Once I felt confident it was sterilized, I covered the pot and moved the it to the sink so it could chill faster in a water bath. I wanted it to cool down below 80°F before I added the yeast.

Finally, after the yeast is thoroughly mixed in, it's time to bottle!

These bottles are currently fermenting and will need some time before they are ready ⁠— about 3-7 days, assuming everything goes to plan.


After 72 hours I transferred one of the bottles to the fridge, then the next day I cracked it open to try a glass:

I have to say, it tasted pretty bad on its own at first. It doesn't taste like it spoiled or something went wrong with the fermentation, it's just... The flavor is way off, especially when compared to a commercial product like the True North drinks.

The fermentation/carbonation seemed to work, although I think it's not quite done yet after 3 days. The pressure was pretty low when I opened the bottle, so I expect it will continue fermenting and becoming more and more bubbly over the coming days.

I will say, however, I succeeded in one aspect: It's potent, but it doesn't taste like caffeine. The caffeine made it through the process intact; I can feel its effects after drinking a 10oz glass, however the grapefruit flavors and citrate salts masked the bitterness of the caffeine perfectly.

If I was to do this again, I might try:

I ended up making a simple syrup out of a cup of sugar and a cup and a half of water + the left-over "oleo-saccharum" grapefruit peel extract. Adding a spoonful or two of this to each serving improves the flavor dramatically.

Having the fresh citrus peel syrup in it makes it "smell right" and taste a lot better. Most of my friends that tried the final version of the drink with the syrup included seemed to like it, describing it as "refreshing", "interesting", and "strong".

EDIT: I ended up making 2nd and 3rd batches, see my comments below! Second batch ended up looking a lot better, with no floaters in it, and I think it tastes better too. For the third I experimented with a new flavor, cherry-lime.

It gets fully carbonated after about a week, honestly I was very satisfied with how the carbonation turned out. As the brew aged in the bottles, it also started to get more of a sort of "dry" taste that I remembered from extra-dry wine or cider, which used to be my favorite, so obviously I was pretty happy about that. I don't know how long it will stay good in the bottles as I've always drank it all before two months elapsed 😇 but I think it tastes best after at least 2 weeks at room temp.

When It Does Not Listen for Thee, Ask for Whom the Server Listens (Understanding Listening Addresses)

What is a Process? (Operating Systems)