Why I Quit my Software Engineering Job

At the end of this year, I will be saying goodbye to my current employer and exchanging contact information with many of the great people who I have called my colleagues, mentors, and teammates over the last 3 years.

This departure will be bitter-sweet, because I like my job and I like my co-workers. After shuffling around the Twin Cities corporate software scene and working at 4 or 5 different places, this gig has been my favorite, it's the only one I stuck with for over a year.

This is a big change for me. I feel like I have been working towards this for my entire life. I read a lot of "frugal living" early retirement blogs in college, and even before that, I thought of getting a job as an unfortunate reality, not something that would become my life's work, or something that I wanted in order to elevate my social status.

Even before that, I remember throwing a tantrum when I was a little kid where, in tears, I beseeched my parents:

Can't you just give me 2 peanut butter sandwiches and 2 stalks of celery a day to survive? Why do I have to [help with chores]? I don't ask for much, just leave me alone!!

I think I was trying to make a deal with them to get out of having to listen to anyone else ever again. Kids are great, right? 😂

At any rate, I think I've always wanted to do things my way, to be in charge of myself and do things on my own time.

If you love your job, why retire?

First of all, I don't think "retire" is the right word. I have paid off my debts and saved enough money to take care of myself for a while, but not forever. I won't be under threat of eviction from my apartment for a few years, but unless I'm incredibly lucky, I'll have to return to a salaried position eventually.

I've worked for a lot of companies I perceived to be evil. For example, American healthcare industry companies that overcharge for their crappy products while wining and dining the regulatory authorities to maintain their enforced market monopoly. Or the NewsCorp media empire. I wouldn't need any particular reason to quit my job at these places. I treated them as a means to an end and moved on ASAP.

But where I work now, we have lots of competitors, and our customers are shipping businesses operating on thin margins, so we have to work hard to improve our product every day and quantitatively show how our product can make their business better, more efficient, and safer. I respect the business a lot in that regard. It seems to be a bit of a sweet spot for corporatism and free-market competition where the drive to increase profits actually aligns with common sense and morals. 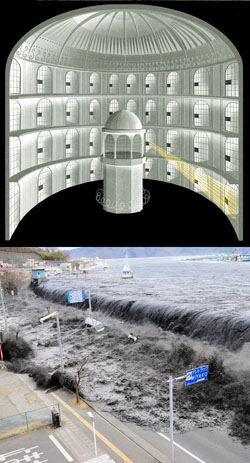 But I still quit.

I'm not sure there is a word for what I'm doing. It's not really retirement, it's not really a sabbatical, I'm not really starting my own business... But whatever I'm doing, I believe it's really important.

The world terrifies me. Things seem to be changing fast. I worry all the time about corruption and the dystopian direction of our society, climate change, mass extinctions, genocide, fossil fuel depletion, World War III, digital warfare, etc. As a person in a particularly privileged position, I feel responsible for doing something about it. At very least, I feel responsible for acknowledging when things are not looking good on the horizon. I feel like when "the shit hits the fan", I should be ready, and I should be able to help other people cope and get through. In a way, I feel responsible for the future of humanity, and I want to do whatever I can to help the next generation at least have a future at all. I'm worried that if I don't start now, I may never get another chance.

I don't have kids, and I don't plan on getting anyone pregnant, but I don't want my friends' kids to inherit a Mad Max world from thier parents.

I think about my work a lot, about how software has changed the world so much already, and how the work I do fits into that. Software can have an immense economic output. For most large businesses, software and data are life and death. A single bug fix at the right time can be worth millions of dollars.

Even though developers are highly paid, I still believe that the software labor market is exploitative, in that software development groups typically contribute much, much more to their employer's bottom line than their aggregate salary. For example, I personally know a handful of people who, without which, my employer would be almost certain to lose a contract worth millions of dollars per year. Those people are certainly not being paid anything close to that many millions of dollars a year in aggregate.

So, I'm quitting because I feel like I can create millions of dollars of value with my work, but right now I'm not being paid for that value I create.

Also, I believe that Free and Libre Open Source Software is way more economically efficient than proprietary software. There is little to no marginal cost for software and data, they can be copied as many times as you want for free. This makes the digital economy work differently from the industrial economy it grew out of. Property rights, patents, and copyrights, etc should be N/A in a digital-native economy; FLOSS software, open research, and maker culture has shown that there is another way, and it's actually way better. The best consumer grade 3D Printer in the world is 100% open source, both software and hardware. FLOSS is more like anarcho-communism than it is like any other political system. It's totally foreign to traditional businesses, but yet, it has dominated the entire internet and server-software sector.

I'm also quitting because I believe that working on proprietary software limits the positive impact my efforts can have.

Since I have become a software developer, I like writing code, and I seem to be pretty good at it, I'm going to do what I can with software, to try to make myself feel better, and for the good of the world.

I think my first goal will be to make software and data capabilities more accessible to more people. I believe that software is incredibly important, and I want to live in a world where anyone can harness the power of software as an owner, not just as a tenant or as livestock in a data-farm. I have written a bit about this before, primarily in my Pragmatic Path Towards Non-technical Users Owning Their Own Data.

I've been working on forming my ideas around this for years, and with my last day punching a clock coming up, I'm extremely excited to get started!

How to get a decrypted Wireshark packet capture from a node.js application that is talking HTTPS